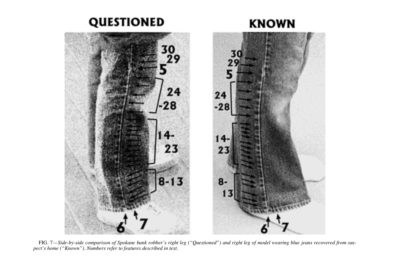 This has a familiar ring to it. More or less it is the “I can see it, even if you can’t” brand of accepted “scientific” testimony. This is the path of other forensic innovators who single-handedly advance their own version of “accuracy” and “probability.” In this story, a  pixel pushing FBI Image lab guy climbs the ladder by putting bad guys away and rises to the high atmosphere of the AAFS org.

“Such shortcomings could have led judges to block image analysis from criminal trials. But Vorder Bruegge single-handedly built a body of case law that has kept the FBI unit’s testimony admissible in the courts. His 22-year-old comparison of bluejeans is the legal foundation for most photo comparison methods.

The FBI Lab’s image unit had routinely used unproven techniques since the 1960s, but Vorder Bruegge embraced and expanded them, according to court records and his published articles. At times, he has given jurors baseless statistics to say the risk of error was almost zero. Studies on several methods in the past decade have found them unreliable.

Today, Vorder Bruegge is one of the nation’s most influential crime lab scientists. He serves on the Forensic Science Standards Board, which sets rules for every field, from DNA to fingerprints. He’s a co-chair organizing the American Academy of Forensic Sciences meeting this week in Baltimore, a gathering of thousands of crime lab professionals, researchers, lawyers and judges.”

Dr. Michael Bowers is a long time forensic consultant in the US and international court systems.
View all posts by csidds →
This entry was posted in AAFS, forensic testimony, Uncategorized, US Crime labs and tagged American Academy of Forensic Science, forensic examiner error, Forensic science, wrongful convictions. Bookmark the permalink.