Young Forensic Scientists : Are you learning about the FS Reform issues? 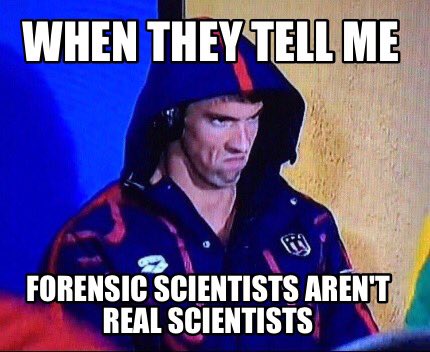 There is a trend within the forensic science media is the that the millennial generation is ripe to populate and continue the glory of crime detection. I certainly experienced a version of that in the 1970’s (all before CSI, but Quincy, M.E. was a hit). This latest gen of adults possesses much more tech savvy (of a digital flavor), but their STEM equivalency may be much less and has been described as an educational “gap.” I would suggest that all the young folks  I have seen at forensic science meetings, having seen their post presentations, etc. and obvious basic science training are certainly in this category.

This is brief a look (first page searches on Google) into various content that recognizes and promotes bringing new blood into the realm of an industry predominately controlled by police, prosecutors and politicians.  All are done with the best of intentions, but the professional promotions on forensic sciences are very conservative and rather stiff when regarding critical outside influences.

I  became curious when considering all the news about what some call “forensic science reform.” So I googled: “forensic science and young aspiring scientists.” The webpages I looked at are currently silent to the battle of wills being thrown about in the daily media’s focus on the forensic standards’ debate.  The news reflects either advocates of more scientific rigor  or a push-back declaring this a monumental attack on the walls of a sacrosanct criminal justice (see below for references).

You may can pick one side or the other because, as yet, no one is acting as a “mediator of moderation” or “conciliator of conflict” after the President’s Council on the forensic equivalent of STEM elected to re-up what the National Academies of Sciences promulgated for a “safer” use of forensic expert types back in 2009. Today the AAFS News Alert put out a link to the President’s Council of Science and Technologies Report titled “Forensic Science In Criminal Courts: Ensuring Scientific Validity of Feature-Comparison Methods.” Here is a link to a .ppt on the scientific method.

For a much simpler talking point, just reflect on wrongful convictions (See: The Registry) and their underlying presence of forensic weaknesses.

Opinions range broadly on the contribution of forensics to bad convictions. It is almost 50% by the Innocence Project 324+ cases. The Registry puts it around 30%. These are versus exonerations being just a “fraud” and almost zero according to reportage by @crimelabreport.

The President’s Council and others say that ” feature-comp-forensics” (aka: impression marks on objects and people) of fingerprints, footwear, some ballistics, and bitemarks) do not deserve a “scientific pass” or exemption about their validity. The following links to governmental groups are either claiming they deserve one or they have it covered. All the links refer to PCAST response by law enforcement agencies and a crime lab certification business.

The IAI: A police lab society,

ASCLD: This is a  crime lab certifying company and has no PCAST position that I can find. The Phelps pic is from their @ascld twitter account and as you can see, they do throw out some “shade” from time to time.

and NDAA: the prosecutor association.

1. Unbelievable, but true. Millennials in the Lab. “Ducks and water. Birds and sky. Squirrels and trees. Some things just fit their environments perfectly. Similarly, with their technological savvy, millennials could be considered the perfect fit for the laboratory, according to the lab managers we spoke with.”

2. The AAAS is the mainstream PR of general science. Here is its encouraging PR piece. “The U.S. R&D enterprise needs more support, but millennials, born near the end of the 20th century, share characteristics that will serve them well if they become scientists, S. James Gates Jr. said at the AAAS-Hitachi lecture.”

3. Millennials will advance as the majority working in 2030 crime labs. This article is all about workplace systems and job flow. It also has data graphics. At the end it mentions exonerating the innocent within the crime lab system. #PCAST’s rationale clearly implies here is need for these labs, their directors and certain forensic organization to be more precise.

4. Young Forensic Science Forum (YFSF) has premier presence in this search thread and is sponsored by the AAFS. It is linked to a nice FAQ Q&A that puts in a “CSI Effect” definition among others.

“The CSI effect, also known as the CSI syndrome and the CSI infection, is any of several ways in which the exaggerated portrayal of forensic science on crime television shows such as CSI: Crime Scene Investigation influences public perception.”

That’s accurate. The news and opinion media is also showing people perceiving others than just the CSI actors doing some exaggerating.

The full website highlights its annual meeting speakers for 2017 and has their mission statement as, in part:

“Participants of YFSF come from all sections and membership levels of the AAFS.  YFSF provides an amazing opportunity for new forensic scientists to interact with and become part of the established forensic science community. This is accomplished through meetings and educational sessions at the annual AAFS conference, the YFSF newsletter, and this website.”

A look at their September newsletter shows its 2017 meeting’s general info about the speakers the AAFS invites to their sessions (congrats to RT Kennedy! @liquiturdotcom), basic job interview hints including a great one on “hide your tattoos” plus its pledge to:  “….engage and provide guidance and support to our generation of students and professionals throughout the entire year.”

This is quite commendable. Good luck to all and…..

Please read the PCAST Report. It is 178 pages of good advice and facts worthy of discussion at the AAFS meeting in February 2017. Do this even if the AAFS doesn’t have its own PCAST response by then.