Its all about 2 bitemark opinions from a murder trial.

In an unanimous 7-0 decision, the court’s holdings vacates Bill Richards murder conviction from 1997 and makes his imprisonment since 1993 subject to release from prison and opens up future exoneration proceedings. Richards had a successful 2009 exoneration overturned on appeal by San Bernardino County’s DA Michael Ramos and the state’s Attorney General Kamala Harris who is now running for the US Senate.

The telling points made  by this court in Richards’ favor were enabled by its using the 2014 new California “junk science” Penal Code statute 1473 created directly because Richards’ appeals. His 2012 attempt to prove evidence of his guilt from a pair of bitemark experts was “false” failed in what this court calls Richards I.

Previous to 1997, there were 2 hung juries and a court had recused itself.

The State’s forensic dentist Dr. Skip Sperber had determined at 4th trial that Richards’ teeth “were consistent” with a skin lesion on his murdered wife’s right hand.  In an added comment, Sperber said Richards’ teeth were seen in the human dentition “2 out of 100” people. Richards’ defense dentist agreed in part by saying the lesion was definitely a human bitemark. 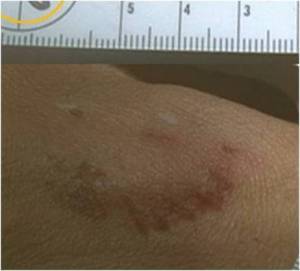 Evidence considered a human bitemark in 1997.

In 2009 both dentists recanted in affidavits and later court testimony. They credited the use of “new” advances in digital imaging allowed them to see a single autopsy photo of the victim’s hand without its original off-angle camera distortion. That was made possible by this forensic dentistry digital imaging manual.

Back to today’s “High Court” opinion.

Soon we will hear what the San Bernardino DA has to say about this. According to a news report in 2012, San Bernardino has never had an exoneration on the books under Ramos’ tenure.  The same article has the DA office offering considerable resistance to the term “exoneration.” DAs in this situation have 60 days to ponder whether to re-charge after a vacated conviction. This potentially would be Richards’ 5th trial for murder.

Here is the broader context of Richards’ now improved chances for  freedom.  DA Ramos has also gone on the record saying he considers frivolous appeals are “clogging up” California’s Criminal Justice system.

Any new filing of murder charges by the DA against Richards will bring a litany of CSI high value evidence against Richard being guilty. In fact it forms a road to his actual innocence.

A jury would have to consider some of the following:

The total court’s opinion of In re William Richards is here.  Its 45 pages.

Richards’ litigation team is the California Innocence Project at California Western School of Law. This is its Twitter feed.