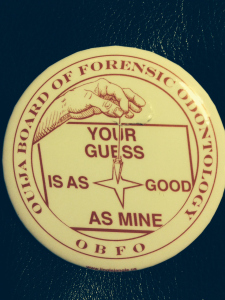 As the article states, post conviction DNA availability (numbers) have declined significantly. There are hundreds of “historic” bitemark aided convictions since 1975 which are potentially a rich resource of evidence necessary to overturned those decisions.

Lets just say that the US bitemark group from the American Academy of Forensic Sciences could care less about helping dig old cases out of their file cabinets. These dentists at the American Board of Forensic Odontology are indifferent to the Innocence Project’s proofs and others who agree that, since their inception in courts, bitemark opinions have damaged the US justice system and those they have accused to be perpetrators of heinous crime.

“The focus on overturning old-school forensics is part of what Justin Brooks, director of the California Innocence Project, calls the “second wave” in the fight to overturn wrongful convictions.”

“First was the slam-dunk DNA cases; those opened the door to all this other stuff,” Brooks said. “Courts are now open to the conversation and are more willing to grant cases. That just wasn’t true 20 years ago.”

Dr. Michael Bowers is a long time forensic consultant in the US and international court systems.
View all posts by csidds →
This entry was posted in Uncategorized and tagged American Academy of Forensic Science, AMERICAN BOARD OF FORENSIC ODONTOLOGY, Forensic science, Miscarriage of justice, wrongful convictions. Bookmark the permalink.