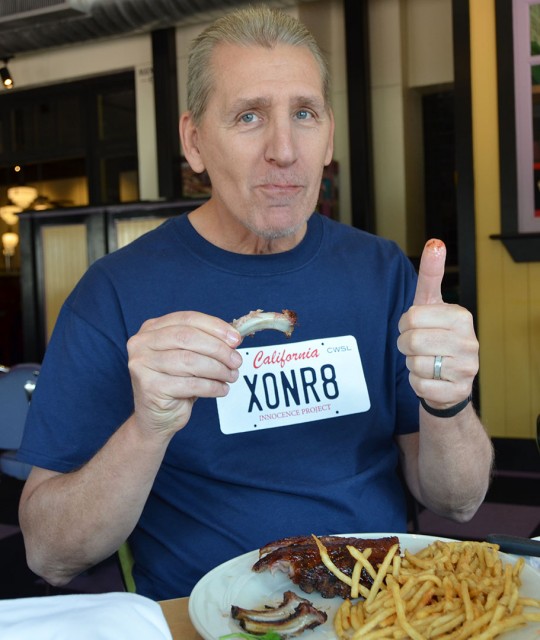 Bill Richards, who spent nearly 23 years in prison based on dubious bite-mark evidence, was released in June.

The inimitable and award winning Jordan Smith at The Intercept once again lays the hammer on the prime example of unvalidated science cloaked as “crime fighting” expertise in the modern era. She has written previously about Bill Richards’ (picture above) 23 year long battle towards innocence here, here, and most recently “Its Absolutely Stupid a Fifth Trial Planned in bite-mark Murder Case.”

The Intercept from this Wednesday.

“In the case of bite-mark evidence, the report is especially critical. “PCAST (The President’s Council on Science and Technology) finds that bitemark analysis does not meet the scientific standards for foundational validity, and is far from meeting such standards,…….”

It’s all about the White House and its scientific (but thank goodness not forensic) panel who delved through the mountain of mis-information and damage caused by a small host of forensic dentists since 1975. This WH commission has be on this subject for years.

What’s really good is that Jordan has met and heard all of the heavy hitters of bitemarks. Her writing reflects first hand knowledge to how unrealistic their posturing has become in the quiet halls of the American Academy of Forensic Sciences and not so quiet hearing rooms of the Texas Forensic Science Commission. At various professional meetings, I at first insisted she and I had to meet surreptitiously so she wouldn’t be “tainted” by my presence. We met in a parking structure in Orlando next to the AAFS hotel. At first she thought it an odd meeting place. Soon, it became a running joke for both of us.

The bitemark bunch soon found us out by other means ( at some point we had breakfast together) and then cancelled interviews she had scheduled with them and avoided her from the corners of the various AAFS meetings, hallways and wine/cheese “mixers.” The refusal to have press interviews goes back to 2013 when they cancelled out on the Associated Press at the Washington DC AAFS meeting. Soon thereafter, the AP came out with AP IMPACT: Bites derided as unreliable in court.

“You have no balls” says a forensic dentist.

This February in Las Vegas, Jordan and her Intercept colleague Liliana Segura (@lilianasegura) had a hallway “fly-by” meet with Dick Sourviron (picture above), the noted Ted Bundy bitemark innovator who seems to dislike journalists a bit since his Bundy bitemark halcyon days of positive press over Bundy’s teeth marks in 1978. He was all pleasant until I introduced these ladies as media professionals. Lacking some ability to be polite, Dick just sauntered away.

This pales in the light of an ABFOer’s (a past president of the bitemark group) hilarious “you have no balls” 2015 thundering public statement at a Orlando FLA dentistry meeting to the then AAFS president. The dentist later apologized. This occurred soon after my continuing AAFS membership, jeopardized by a contrived formal complaint protest from the American Boarders of Forensic Odontology, was reconfirmed at the Academy’s  Board of Director level. Back in 2013, one of the dentists mentioned in the AP article noted above called me a “murderer of bitemarks.”

Some of these bitemark  dentists just seem stressed out or worse. Read Radley Balko’s lastest on another dentist of considerable fame. That would be Michael West from Mississippi.

“Expert witness (West) goes nuts during questioning……” here. And  here is what West’s protector, MS attorney General Jim Hood, has to say about criminal defense attorneys. This May, there were significantly worse words said in the Columbus MS court hallway.