The vagaries of what is “science” is a topic of interest to historians and those in the science business as part of their training. “Scientific advance” is what is expected to be the outcome. An odd variant is when some “science” is considered to be faulty, incorrect, or outright fraudulent. In others words, in the health sciences, it would be “we are killing people instead of curing them.” This mirrors the truest medical cliche of all time which is “physician do no harm.”

When a “relevant scientific community” (taken from the Frye Rule seen in the US Rules of Evidence) takes upon itself to debunk its own previous beliefs or assumptions, then they shouldn’t be used. In medicine, that means treatment should discontinued.

When the method involves forensics, the effects of a faulty method  has people falsely accused still in prison or as in Todd Willingham’s sad case, actually executed by incorrect arson “science.”

A event of singular importance has occurred within the forensic dental community. 13 full text articles presuming to have proven “dental uniqueness” relative to human identification from bitemarks have undergone another university-based peer review (The Catholic University of Leuven, Belgium). These articles were previously negated within the 2009 findings of the National Academy of Sciences report on odontology. They also have been criticized by researchers at the U of Buffalo School of Dentistry. The conclusion of this latest review substantiates the NAS which has been reviled or ignored by “elite” members of the  ABFO. Yet,  in opposition to pro-bitemark literature, the Leuven researchers have determined the “bitemark mantra” of profiling each suspects teeth as unique is unproven.

Odontology practitioners still go into courts and take the stand in favor of bitemark identification. In fact, Brooklyn ADA Melissa Mourges  and  ABFO past president Frank Wright are giving a presentation at the next AAFS convention about “how to take  bitemark evidence from the crime scene to the court room.”

Read Professor Iain Pretty (From the U of Manchester) blog on what this new finding really means. 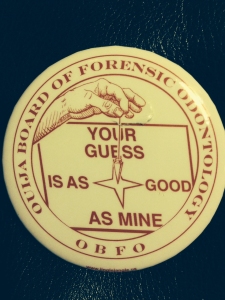 Once convicted to death, this is Exoneree Ray Krone’s opinion of the ABFO