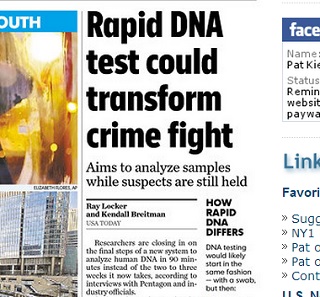 Police in house testing requires adherence to fundamental scientific procedures. In this case, it is about DUI (OUI) testing in Massachusetts. Police are all over advancing into police station DNA testing with “magic boxes.”

“He said he compared documents provided through a court order with others he obtained via a public records request. More than 400 checklists used to determine the reliability of the (alcohol breath) tests were withheld, Bernard said. Nearly every document that was withheld showed that the breath test failed to calibrate appropriately, he added.

“There are thousands and thousands of defendants who either pleaded guilty or went to trial because they didn’t have this information,” he said.”

Dr. Michael Bowers is a long time forensic consultant in the US and international court systems.
View all posts by csidds →
This entry was posted in forensic science reform protecting the innocent and tagged American Academy of Forensic Science, criminal justice, DNA profiling, rapid dna. Bookmark the permalink.