The nature of DNA exonerations are changing 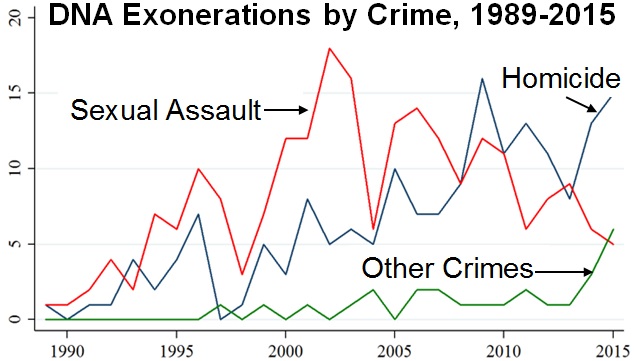 The National Registry of Exonerations just published data on the various crime types of cases where exonerations occur.

DNA exonerations no longer occur primarily in rape cases, but in homicides, including many rape-murder cases.

In addition, the number of DNA exonerations in which non-DNA evidence was necessary for the exoneration is approaching the number where DNA alone conclusively proved innocence.

All told, rape is an element in 78% of known DNA exonerations (329/420). In that context, the shift since 2008 mostly means that DNA exonerations are increasingly about rape-murder rather than rape alone

Dr. Michael Bowers is a long time forensic consultant in the US and international court systems.
View all posts by csidds →
This entry was posted in Uncategorized and tagged criminal justice, CSI, DNA profiling, Exculpatory Evidence, exoneration, wrongful convictions. Bookmark the permalink.