Ray Krone’s Exoneration from bitemark evidence: THE INSIDE STORY @csidds

Nothing says junk science more than this forensic method that has no legitimate validation of methods, no QC, no internal or external audits, no calibration of its testing or personnel, no reproducible testing, multiple “approved methods,” no equipment requirements, no estimation of measurement error, no control standards reference samples, and mere assurances that what its examiners say is in accordance to a scientific basis. Im sure members of this group on the NCFS will ignore all this and promote themselves to the NIST governing committee. All the standards of competency noted above fall within the ISO Standards for Accreditation ISO 17025 and are considered the minima for scientific lab conformity and confidence. I doubt the US justice system understands any of this. Meanwhile, read this past blog piece about the case mentioned most frequently as the reason why bitemark IDs are synonymous with “junk” forensics. 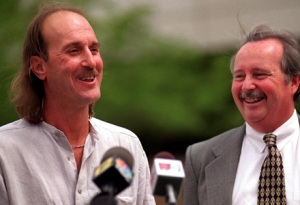 This picture has Ray Krone ( left) immediately after his release from AZ prison in 2000. Part of his story is below, which develops the persona of the Prosecutor Noel Levy who put Ray on  death row. The article was written in 2013 about prosecutorial misconduct in AZ which focused on multiple cases including Krone’s. Ray is now a international public speaker on the subject of “win at all costs” prosecutors and junk forensic science.

In fact, during the 10 year fight for freedom, his family reached out to the American Board of Forensic Odontology (ABFO), the “elite” dentists of the American Academy of Forensic Sciences (AAFS) for an official review of the bitemark aspects of Ray’s case.

The Preamble of the American Academy of Forensic Sciences is it’s public commitment to scientific integrity (and its subsidiary forensic boards like the ABFO). I…