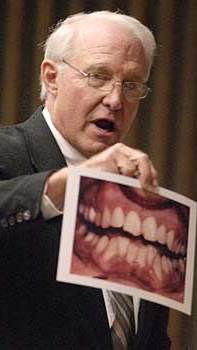 THE FIELD: BITE-MARK COMPARISON Forensic dentist Richard Souviron, during a police workshop, urges caution over bite-mark comparisons: “You’ve got to be real careful with this kind of evidence.” Tribune photos by Alex Garcia.
Tribune photo by Alex Garcia

Yes, that is the latest scientific report from the bite mark matchers: …..“You’ve got to be real careful with this kind of evidence.” The teeth belong to serial killer Ted Bundy.

This dental saga continues beyond the expose’ style news and peer reviewed reports (at least 2 decades worth) of their disastrous effects on the lives of innocent men and women wrongful convicted. Go to this classic article,  “Guilty, said Bite expert, Bogus says DNA” by Pulitzer Prize winner Maurice Possley and Steve Mills’ in their 2008 Chicago Tribune series, “Forensics Under the Microscope.”

Recently, more of their past has emerged to new perspectives.

The bite markers’ “attack” on their detractors has been copiously documented and most recently seen in Mississippi from bite mark self-described innovator Michael West’s testimonial Trump-like disparagement of folks. On the record: “He’s a hypocrite. I have his emails,” said West in a MS court. West considers others to be “forensic science provocateurs” denying his glory days as a poly-math forensic marvel. All of us, at one time or another, acting as opposing experts or attorneys in many death penalty cases, have been active in debunking his legacy as the Copernicus of Forensic Science. Go to “Expert witness goes nuts…..”

Here is the latest. The remaining membership of the AAFS approved American Board of Forensic Odontology now have a new hurdle to overcome.

The Forensic Specialties Accreditation Board (FSAB) is coming onto the ABFO radar this October, 2016. The bite markers public personae as “Board Certified Diplomates” under the AAFS umbrella lies 100% on the FSAB’s renewal (every 5 years) of their status.

“The ABFO definitely got a pass  in 2012” (its last certification review) says Dr. David Averill, an ABFO source who contributed to FSAB for over ten years.

But, since the ABFO passed before, what really are the scientific expectations of this “certifier of the certifiers?” Questions abound.

Is it just another show? I would opine that it is unfortunately possible. From the record of the AAFS,  (over 7000+ members), a cordoned  small bunch of entrenched old-timers have an odd sense of twisted logic in  their “vetting ability” and “protecting the scientific method” history. Alot of it is passive aggressive inaction and in other respects,  is very partisan self-interest. I’ve got statements, transcripts and legal documentation to support it.

Back to our core story.

FSAB was spun-off from the AAFS 18 years ago and claims to be now an  “independent” entity. This is a bit rich, as its committee and membership structure is generously populated by AAFS members and ex-AAFS officers. Not to be ignored is that the next FSAB president was the trumpet-like advocate of bitemark matching and “comparing” methods during the recent series of hearings held by the Texas Forensic Science Commission. The TxFSC convened a top-to-bottom review of the bitemarkers via a legislation-allowed ( from an “anti-junk science bill passed in 2012) complaint filed by the NY Innocence Project on behalf of inmate Steven Chaney’s exoneration litigation. The Commission took the ABFO apart which was reminiscent of the National Academy of Science 2009 take-down of the same group. Texas ran the bell loud and clear in determining the dentists’ courtroom remarks and expectations of reliability again did not pass their scientific method “stress test.” A moratorium was placed as a lid on the dentists in question.

Let’s take a look at the FSAB mission statement as a predicate to their credibility. In part it says:

“This program was established to advance the reliability and validity of forensic evidence in the administration of justice through the accreditation of qualified organizations that credential and certify individual forensic specialists.” Here is their PowerPoint (2012) slide show of their dedication to scientific excellence.

Those are powerful words.

Will the lid stay in place anywhere else than in Texas? It may be up to the FSAB to tighten down the clamps at the national level. The ongoing and prolonged proceedings of the National Forensic Science Commission do not have the capability to do this.

Here is a decision statement  that the FSAB should consider issuing:

Odonts should suspend operations unless and until it can be determined through plentiful, sound empirical studies what they are capable of doing with a high degree of reliability (and validity) versus what they cannot. And then they can return to business to offer services that are strictly kept within the limits of what has been determined to be reliable and valid. (And, because there is a high risk of individuals venturing outside of those boundaries (aka cheating), there should be frequent, transparent, random review of cases by a committee committed to keeping a firm leash on odonts.)

Lets hope that history will say that the practice of “being real careful” as a bitemark matcher was de-certified from the forensic pantheon in 2016.